Support the launch of the Svět Škodovek car museum

... and save a piece of history! Help us in jointly establishing with two oldies but goldies enthusiasts in setting up a facility with an interesting history, a place where memories are brought to life.

Why did we create a collection?

In 2019 and following many years of searching, we bought a facility corresponding to the needs for the operating the museum. At first glance, it seemed that minor adjustments would suffice to open it. Unfortunately, it turned out to be rather a job for a demolition company. Yet we didn't want to call it in and you can find out below or in the video why we made this decision. So we started reconstructing and rocketing our work speed.

The biggest investment we hadn´t expected at all was the roof, which had to be completely torn down and rebuilt. This has led tremendously exceeded our budget and we still have a lot to finish, such as the floors, air conditioning, security equipment, exhibition equipment, fencing and much more.

That is why we have decided to address you, Skoda fans, lovers of classic cars technology, but also the general public asking you for help in completing the entire reconstruction, so that in the spring of 2021, we may open the gates to the Svět Škodovek and welcome you as the first visitors.

We've shot our entire story for you, so take a look at it in the following video, turn on English or German subtitles:

We are two classics enthusiasts - Pavel and Tomáš. Our paths crossed 15 years ago and at that time, it was not about cars, but merely about working together. Back then, Pavel (and now brace yourselves) had only one oldtimer, the Skoda 450, which he had been renovating on weekends at home in the garage for about 5 years. In the previous century, Tomáš still had his Skoda 110R as his first car, and then he managed to acquire the wreck of a Skoda 130 RS race car, which he had to sell, because its renovation was well beyond his budget at that time. After many years, he intended to return to the project, build a replica and start racing with it (he still had no idea that one day, he would be the owner of several iconic originals from rallies and race circuits).

As time went on, we started searching for and renovating unique racing, prototype and utility Skoda machines. Initial enthusiasm turned into systematic work aimed at saving our ancestors technical heritage and preserving it for future generations. When we started our efforts, collecting Skoda cars had not yet become fashionable, so it went relatively easy. We saved many cars from scrapping or bought them out of their racing careers. We gradually tracked them down both in our country and throughout Europe setting up a collection of about a hundred unique cars that you won´t find anywhere else, not even in the Mladá Boleslav museum.

We knew right from the beginning that if the project was to make sense, we had to exhibit the cars to the in a publicly accessible museum. For several years, we had been looking for a suitable building to house our needs. Following many failures, we finally succeed at the end of 2018.

And as they say - everything has its time. The facility we discovered has been associated with engines and cars since its inception in 1945. Let's turn back to the past - even after the revolution in 1989, it was yet a Jawa production site. Prior to Jawa, it had been part of the national Autobrzdy Jablonec company, and even before that it was the PAL state owned company. And this brings us to the first and most interesting owner, which was the company J. Kraucher et al.

Jindřich Kraucher, a co-owner was one of the first pre war car racers and a very skilful designer as well. He was probably the first Czechoslovak to build a 2x OHC engine with steel cylinder liners prior to World War II. 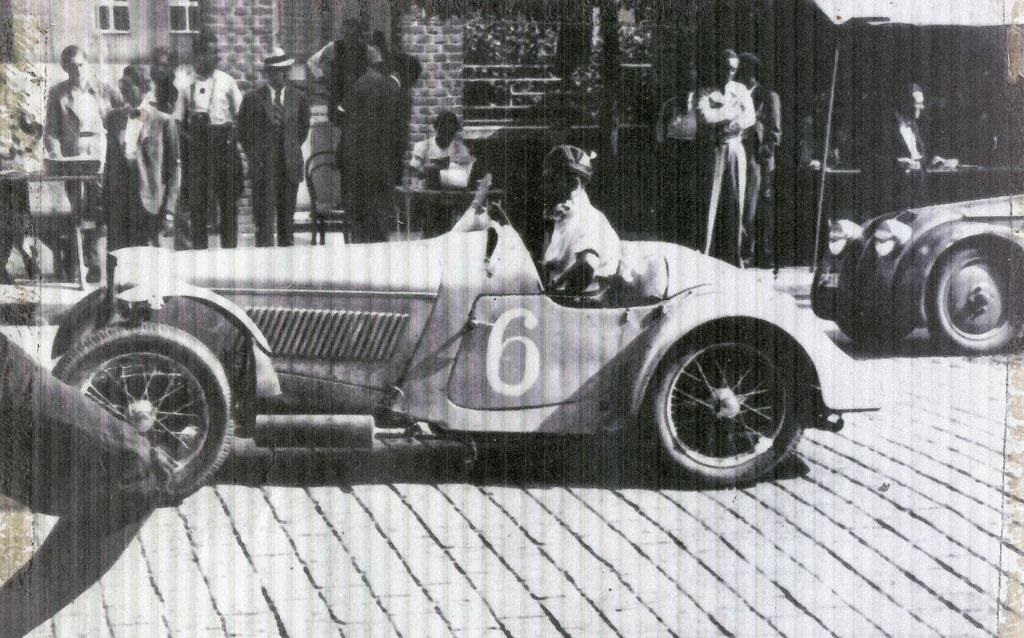 During the war, he developed his company and his inventive spirit proved itself. Just for fun, he set up a nylon stockings repair machine, to repair the then scarce nylon stockings. After the end of the war, he was falsely accused of having collaborated with the Nazis and imprisoned. Despite the fact that all suspicions were dispelled and that he was released from custody, the entire company remained under national administration and not returned to the original owners, despite the urging of local national committees in the surrounding villages.

In 1948, the Communists began to reopen the already closed post-war court cases, and Jindřich Kraucher preferred not to wait for anything and emigrated to Brazil. He left his entire family here and it never received any information about him during his life. When he died, however, it became clear that he had been trying to contact them, but the STB prevented any attempts of them getting in touch.

We managed to trace back his descendants as well as the descendants of his associates from the Czech Republic, Canada and Brazil and put together the entire sad story after more than seventy years.

Such a strong history immediately engulfed us and we decided to save and reconstruct the facility. In the spring of 2019, we started jumped in and started building the largest private Skoda cars museum!

What´s in our museum

One of the most interesting exhibits is an original race car. Ours is the largest comprehensive private collection of Skoda race cars in the world! There are unique prototype cars, government special vehicles and utility versions of Škoda cars will also be on display. You will be able to see most of the cars in permanent and short-term exhibitions on an exhibition area amounting to 1400 m2. Upon making an appointment, fans will have the opportunity to see a non-public deposit, i.e. additional 1,000 m2 of exhibition space.

As far as the race cars are concerned, there´s everything starting with the Skoda 110 L Rally going up to the Octavia WRC, and our collection also houses such icons as Skoda 130 RS prototypes, the RAPID 130 H, Skoda 130 LR/H, the Favorit 1600 H. The race cars will also feature the corresponding training and support cars.

The commercial vehicle section showcases everything from the Skoda 1200 to the Skoda Beta. You will also see the entire Skoda 1202 car body series, several variants of the popular Skoda 1203, a special version of the utility Favorit cars, but also a road line machine built on the Skoda 100.

In addition to cars, you will be able to see an old driving school classroom including an entire simulator equipment and many period aids. The classroom will also house an exhibition dedicated to the traffic sign history of traffic signs in Czechoslovakia.

Support a piece of true history!

Support us means that you will not only get a material reward. Thus, you will, above all, feel god that together with us you have helped in saving a piece of our country's history, as we will be to show future generations how clever the famous golden Czech hands were and are, how big our hearts are and how we are able to unite for a common cause.

Perhaps upon visiting the museum, you will remember the cars under which your grandfather or father was laying down in the garage every weekend to repair them for your family to drive on a trip together. You might also tell your children or grandchildren how adventurous these trips sometime might have been. Today, few people ring your doorbell to ask for water, because the car just won't move on without it. Do you remember things like this? Take a look back into the past with your children!

... and there´s yet something more

If we fundraise a proper load of money, we will set up a large inclined ramp as a bonus to imitate a racing circuit, along which the race circuit special cars will be whizzing. Well and that's worth supporting us!

Thank you for your help. We are now looking forward to you visit us!