Is there anything left to show to you? Yes, the ACTION CARDS!

Before we do that, though, we’d like to brag a bit: the German game outlet Teizeiltheiden wrote about us, so if you are a German speaker, read more here.

We’re also making a video for you, to document the gameplay. We’ll show you all the game stages and how the game really works. And if you want, you can still sign up for online game trials: https://docs.google.com/forms/d/e/1FAIpQLSfS5S65TI9m9L7ikn2C6FJQa5d_-HLuxbkrrsBScLogl7J76g/viewform

Now let’s move on to the action cards!

You can get them during the Auction in exchange for Resources, and you can do so in two different ways. In every round, a number of Action cards equal to the number of players is drawn in the Auction phase and placed on the board next to the characters.

Every player can bid four times in the Auction. They can bid on characters or action cards or both, but they need to figure out the right balance. The number of resources and bids is limited, after all. As you know from the character card info, whoever bid the most Resources on a card will win it. That’s the easiest way to get an Action card.

If you Commander has excellent supply lines in Siberia, which means abundant Resources, you can also try a more surefire way: You spend two Resources during the Auction and draw one random Action card from the pack. It’s obvious that will have both advantages and disadvantages. Your co-players will have no way to know the tactics you might use against them later, but you will also risk spending Resources for something you’ll be unable to use.

At the moment, the game has 22 types of Action cards, which fall into 5 main categories. These are cards that influence the number of resources, medicines, character abilities, victory points, and Plot tactics.

Action cards can help you get provisions (Resources), they can heal your characters, prevent wounds, or even overcome death. A rare jewel or incriminating evidence can also help you gain secret victory points, improve your characters’ abilities or steamroll through a Plot. You can lay an ambush, reinforce your troops, or weaken your opponents, bribe or blackmail somebody else’s character, or fall back from a Plot that you would be sure to lose.

What Action cards can you encounter in the game? We’ve got three examples for you!

Sniper Shot: Play it while deploying a character into a squad at a Plot. If the character has the Combat ability (can use weapons), they can wound any character at the given Plot.

Tactical Retreat: Play it before Plots are evaluated, once everybody has passed. The card allows you to remove all of your characters from one Plot into the Reserve.

Jewellery Set: If you play the card, you can spend the jewellery for 3R. If you keep the card, it counts as two victory points. 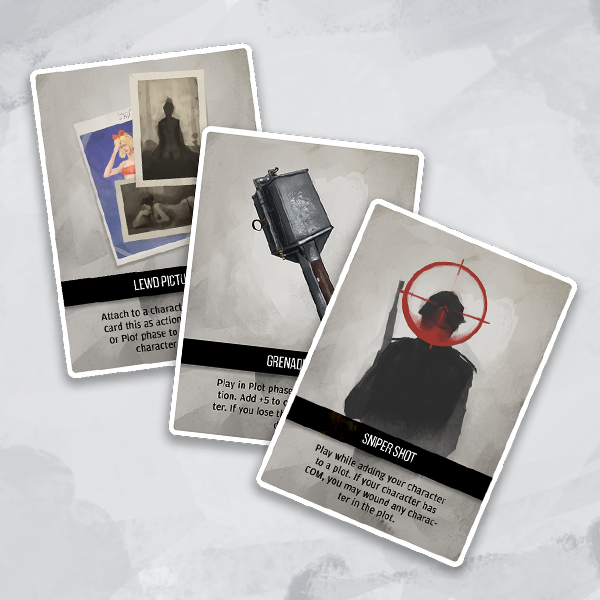