One of the cornerstones of our new game lied in its CHARACTERS, of which we have almost 140!

Characters are the main tools in the hand of the commanders who deploy them to deal with plots: to fight, collect cues, spy, make dignified eulogies, or win over hearts and minds with a motivational speech.

In the making of our game, we were significantly inspired by history: from great political events to individual diaries and current research (for example as part of the project http://legie100.com/krev-legionare/). The heroes in our game intentionally do not include any real historical figures. You will only encounter real people in second-hand mentions, or as characters requested by legionnaire families who explicitly consented to having these real figures in the game. Our reasons for this are mainly ethical. The game is a fictional alternative history, and the characters will experience things that will depend purely on the players’ decisions.

Texts attached to the characters will tell you more about what they were inspired with. These stories did happen and belong to real people, and we want to use them to share the ordinary and extraordinary stories of people who found themselves in the middle of a civil war, whether they be soldiers, clerks, or spies.

The hardest and most expensive task that we are collecting money for through our HitHit campaign, apart from the printing, is the graphic design of our characters. This is how we bring them to life:

Then, for example, you might get this calm and reliable smoker. :) 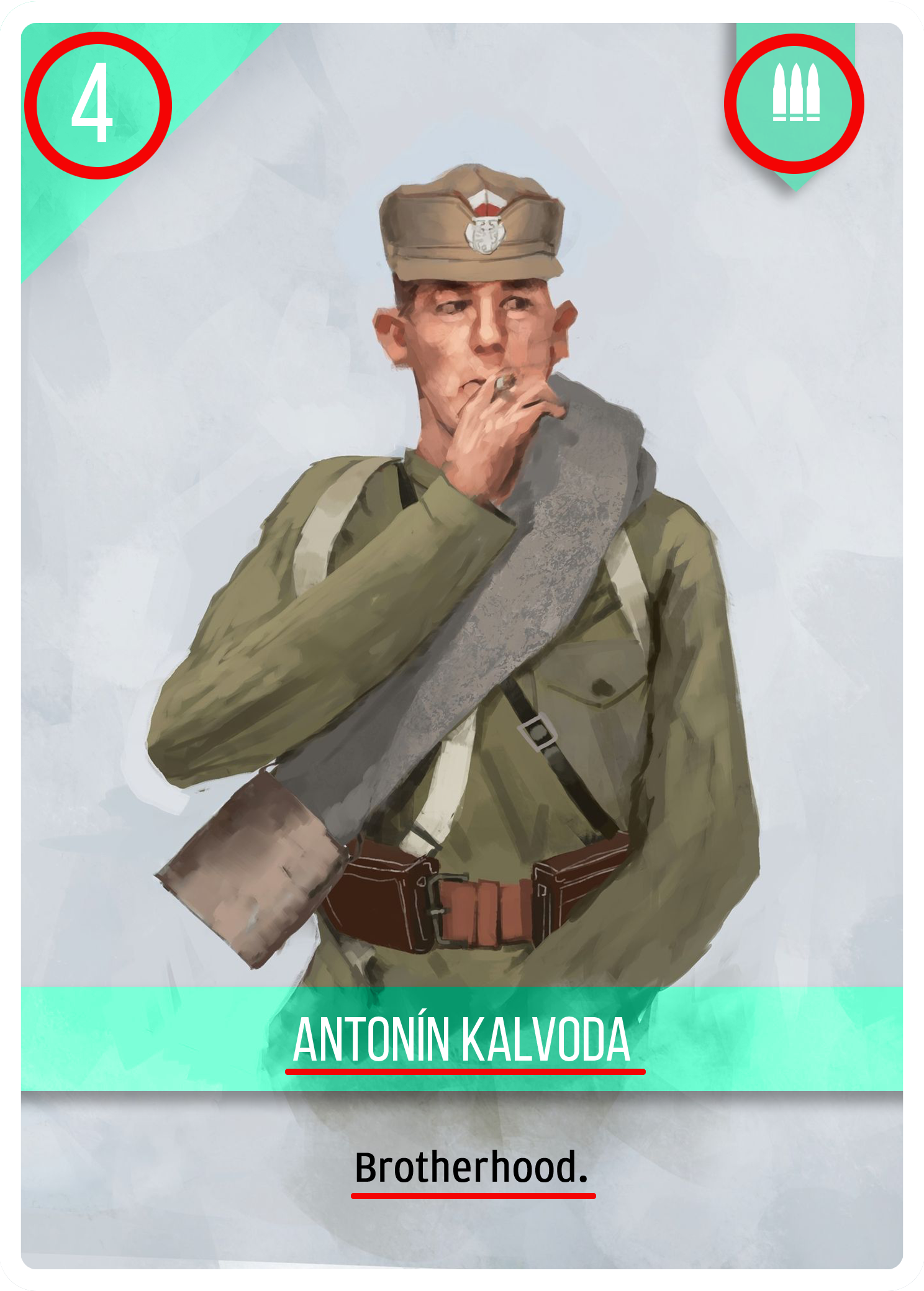 The numbers and symbols on the cards represent the characters’ attributes. Every character in the game is unique. Every card therefore contains their name and their fraction - Antonín Kalvoda here is a legionnaire. In the game that means that it is easiest to draft him for the player who plays as the Legionnaires, harder for the White Army and the Warlords, and impossible for the Reds.

In the game, you will gradually build your own little group of characters that belong to your fraction. Every day in the game (one round) starts with an auction, with the commanders bidding their resources (money, cigarettes, sugarloaves...) to get the best characters. In general, it is easiest to draft characters from one’s own fraction, but we’re in a civil war: Sometimes you’ll bribe someone, sometimes someone might defect. Card prices are not given, they depend on the players’ interest in the auction.

The top left corner contains a number. The character number might be the most important feature of a card: it tells you how capable Antonín is when deployed to a plot. His 4 is pretty decent. The strongest character in the game has 9, but at a dire price; the average is around 4.

On the other side, you can see a bullet icon. Icons determine the plots Antonín can participate in. Plots can have three requirements (combat/intrigue/charisma). Antonin’s one icon means he can only engage in the combat ones. Some characters have two icons; certain extremely capable individuals might even have three. Antonín, as a soldier, is obviously pretty specialized on fighting.

But if you look under his name, you will see one more thing: an ability! Some abilities are described right on the card, but some are so frequent that they’re included in a glossary. Brotherhood, for example, is a typical legionnaire ability. Should any other legionnaire at the same plot get wounded, Antonín can jump in and take the wound instead.

All of that is hidden in one character card: one of the 35 legionnaires and 140 characters in total.