Davids and Goliath - Comics according to real events

Comics against totalitarianism! Support a comic book project that brings the crimes of the Chinese regime to light in a stirring story of investigations based on actual events. What can you change? People's indifference to evil that cannot be tolerated.

We are going to publish the comic book in 3 languages (English, Chinese and Czech) and send it off to China and all English-speaking countries. What's the comic book about?

We have prepared a script and the first drawings for a comic book, in which more than a dozen characters of real people appear. They have been involved in the investigation of serious crimes in China. 3 of them were nominated for the Nobel Peace Prize.

The comic tells the story of how investigative reports came about and sparked a worldwide debate about the abuse of modern transplant surgery in China. It is related to the violent repression at the turn of the millennium, which resulted in the persecution of supporters of the Falun Gong meditation practice and culminated in the liquidation of large groups of dissidents (Christians, Uyghurs and Tibetans).

Based on the real events: We plan to bring the realities of the buildings, cities, airports and the faces of real characters into the story.

With this comic, we want to add fuel to the fire of resistance and draw attention to crimes that cannot be tolerated: The abuse of life-saving science and the rise of the Communist Party's totalitarian power in China, which has lost all moral impediments.

The prominent Czech writer Karel Čapek, in his works such as Krakatit, War with the Salamanders or The White Disease, made readers uneasy by writing about serious topics and catastrophic scenarios – rightly so. Not only when looking at history, but above all when looking at current events, we must continue with this incitement. What's more, we ourselves have to go into battle.

The reasons for creating this comic are basically personal. They are based on our belief that we need to stand up for the values we believe in and, conversely, to actively oppose what we are used to calling "evil." We believe that it is necessary to talk about it, and why not do it through a comic that we love :)

The idea to create a comic on this topic was conceived several years ago. Favorable conditions for more serious steps did not appear until June 2020, when the first part of the photographic script and the skeleton of a story that could be told in a "comic book style" were created quite quickly.

"I personally met several people who are depicted in the story during their visit to Prague in 2014. I wrote about them several times in newspaper articles and, as a fan of comics, I naturally projected scripts in my head about their work and thought about how a comic book about their investigation would look," says Milan Kajínek, project coordinator. "Comics are such a universal, international language. It is also a medium that is dignified enough to tell important, real stories. That's why we decided for it in the end."

Since 1999, the transplant industry has been experiencing unprecedented development throughout China. From a few dozen transplant centers, the number has grown to the several hundred that exist today. According to research, their minimum annual turnover is 60,000 transplants.

The questions posed by the massive development of the transplant industry in China are also the main topic of our comics.

Where do the large number of organs come from, who are their "donors", why do hospitals keep their identities secret? And how is it possible that they provide vital organs within 14 days and transplant them on pre-arranged dates?

There are many events related to the story. The most difficult thing will be to decide what to include in the story and what to leave out. How to combine action with dialogues and maintain a high graphic standard to match the seriousness of the topic are also key aspects. We would like to achieve the best possible result not only for the readers who will read the comics, but also for the real people who have become the models of this comic book.

From the first sketches and pictures you can get a pretty clear idea of the level and quality of the drawings. 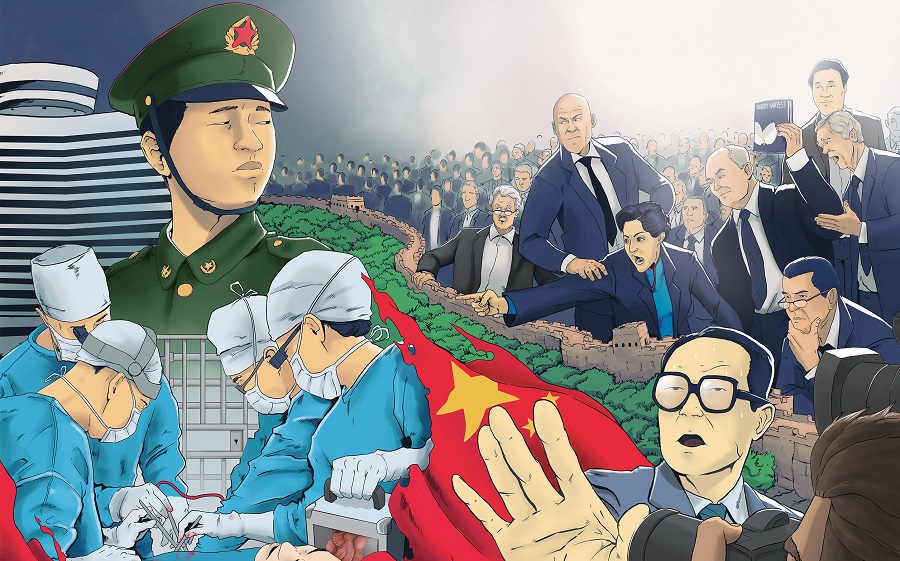 More about the story

The story begins in 2006. It follows the fate of a girl who, under the pressure of circumstances, seeks help from an organ transplant provider in a Chinese hospital. She flies to China to have a heart valve transplanted for a large sum. She experiences a number of strange events there - no one wants to tell her the name of the donor, she is forbidden to ask any questions about anything, the date and time of the operation of a vital organ is planned several weeks in advance, the hospital offers a spare organ if the first transplant is not successful.

In front of the hospital, she accidentally stumbles upon a journalist who is looking for evidence of the secretive H5N1 bird flu epidemic. During the investigation, he discovers a detention camp with several thousand prisoners by chance, which adjoins the hospital. They learn from the hospital staff that the location of the camp is not just a coincidence. People from the camp are taken to the hospital, where their organs are forcibly removed to be used for transplants for people from China and abroad in exchange for large sums of money.

A dangerous investigation begins, which reveals an even more dangerous truth ...

We want to motivate readers to take a greater interest in what is happening in China today and the problem of the abuse of transplant surgery to liquidate dissidents and monetize their organs.

What will you get from us?

We will keep everyone who contributes to the comics informed about the development of work. You will be the first to receive finished sketches and drawings by email, as well as an electronic version of the comic and a hand-drawn poster with which you can decorate the desktop of your PC or the wall of your room.

Come along with us on this project! :)

With your help, we can create comics in Czech, English and Chinese. Your contribution will help to make more people aware of the problem, thus speeding up the solution to the unacceptable human rights situation in China.

We have managed to establish cooperation with professional Czech comic authors. We plan to gradually publish individual parts of the story on-line as a sequel series until we complete the entire book. We set out on a journey of realistic drawing so that readers could easily get to know the main characters as well as the actual destinations, buildings and events.

Main brain behind the project

The main coordinator and "engine" of the whole project is journalist Milan Kajínek. A fan of comics, movies and good literature, as well as a long-time China editor, human rights activist and publicist. You can find more about him on the profile here.

The characters you will see in the comics

How the name of the comic came about

The title "Davids and Goliath" is based on the subtitle of the documentary film Human harvest from 2014. It is primarily a reference to the names of two Canadians (David Kilgour and David Matas), who were the first to conduct an independent investigation into the allegations. Both "Davids" searched in Chinese hospitals and the prison system for cases of abuse of imprisoned followers of the Falun Gong meditation practice for organ transplants.

Furthermore, the name is an allusion to the legend of the duel of the herdsman David with the giant Goliath, which symbolizes the unequal struggle of two Canadians with the giant Moloch of the Communist Party of China. However, they were also followed by other investigators, journalists, doctors, politicians and activists. They are all other "Davids" in our metaphorical conception. Goliath represents a powerful totalitarian regime.

How the title page originated

Two Chinese painters, Wang Jing and Chen Xiaoping, created an oil painting measuring 200 x 125 cm in 2015. Its composition was designed by painter and sculptor Zhang Kunlun, who spent three months in one of the toughest prisons in China - the Masanjia Labor Re-education Camp. The work was created as part of the project The Art of Courage. And it was this image that inspired us to design the composition of the title page.

What works inspired us

The biggest item is, of course, the drawings. It will cost something to create a visual script that will arise from the written script. Then we will have the first sketches, adjustments and remakes in the final drawings, which will have to be colored and texted by dialogues.

Let's add the cost of translations into English, Chinese. These are roughly the main budget items. We do all other activities connected to the comic for free. It costs us a lot of work and time, but because we are doing what we believe in, of course we are very happy to do it without any financial reward.

Thank you for your kind support!

Apr 7, 2021 Thank you for supporting the new crowdfunding campaign

Thank very much to everyone who has remained loyal to us and supported the new crowdfunding campaign at the comic book website here. These days, your support for the HitHit fundraising campaign will be returned to your account. I beg you to maintain your loyalty to the project. Please support the…

The money will be returned to your account within 10 working days after the end of the project, but you can stay faithful and support the comic book with the same amount once more. We have launched a new campaign on the comic book website here: https://www.davidsandgoliath.cz/index.php/en/home/ In…