Original Czech short horror film about the clash of the human forest guardian and the mythical one - Leshy. 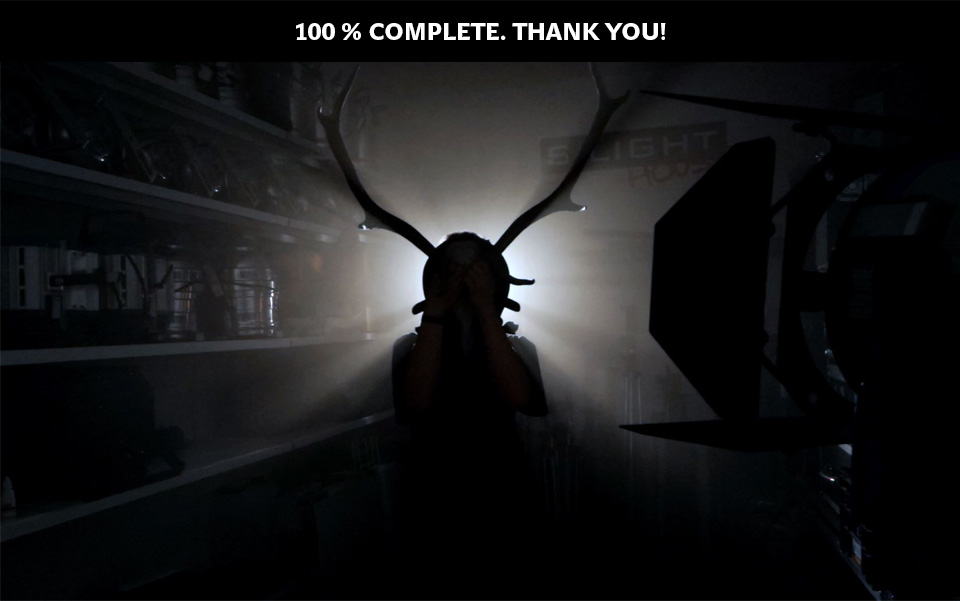 WHAT IS IT ABOUT?

Karel is a passionate huntsman. He has been taking good care of the forest and there are many enviable trophies in his collection. In an abandoned part of the woods, lurchers wake up a creature, who can be an equivalent opponent for Karel. This kind of trophy would be the most precious one. In fairy tales this creature is called Leshy, but meeting it is definitely not a fairy tale. While Karel is trying to track Leshy, he is already closer than he had expected. Meanwhile, the mysterious beast and Karel’s daughter Anna form a special kind of bond. Who will become the real ruler of the woods?

“Bed of moss lies where even deep forest pleads

Where even darkneess bleeds, there half beast half men sleeps.

If you wake him up, the deep forest, you shall be.”

Czech horror film is appropriate for Leshy’s character. It is an object of mockery.  But we know, that Leshy can not be underestimated, nor the czech horror genre.  We want to show that we can also shoot genres other than social dramas and romantic comedies. Leshy will introduce the real character from slavic legends, mythical guardian of the woods from old times when fairy tales didn’t always have a happy ending.

Except for showing the film at main Czech and international festivals, our main intention is to make Leshy one of more stories, which can later be connected to one full length feature film (or a mini series) with other traditional Czech characters in main roles (Banshee, Waterman, White Lady, Devil, Blackman, Melusine).

Pavel Soukup jr. is well known for his work on many short horror films and spots. His biggest success is an animated short Class of death, which was shown on many Czech and European film festivals. Leshy is his graduation film.

Jakub Kostal is a producer of music videos, spots, short and full length movies. He is a co-organizer of the regular, monthly short-movies screening event iShorts. Jakub became friends with Pavel at a very young age. Actually, Pavel was the first to tell Jakub about Leshy. Since then he hasn’t  been near a forest or park.

Petr Koubek is a student in his last semester of screenwritng at the Czech Film Academy. His screenplay Libverdy was awarded by the RWE foundation. He has cooperated on several TV series and advertisements. In his free time he works as a head of the program iShorts, the monthly screening event and as a reporter of the only TV magazine focused on cinema in the Czech Republic. He comes from a huntsmen family, so, of course,  he is friends with Leshy.

Václav Tlapak studied animation, but soon he found out that working with people is easier and since then he stands behind the camera. Besides full length feature films, he has worked on many shorts and documentaries. Vašek is Leshy’s favourite team member, because he is very careful about the woods, he prefers moves with a camera to stepping on little mushrooms.

FX Creator Studio is the key member of our team. Leaders Vlad Taupesh and Josef Rarach are the only specialized makeup artists, who are capable of creating real looking masks on par with Hollywood. They are passionate collectors of old slavic legends, and Leshy is their personal Mick Jagger (pure love).

We have professional equipment, a skilled crew and a finished script. We are missing one important thing - Leshy. We can be food free, we can sell our kidneys, or sell our souls to the Devil. But still we don’t have enough finances to get Leshy’s full body costume done. And we want the best for him, we want him as perfect as our drawings of him. That’s why we decided to try HitHit, and try to find people who want to see Leshy come alive and appear as the scariest European character.

You can take part in this original horror story by helping us prove that it is possible to shoot a good genre movie in the Czech Republic.

MONEY WE ARE ABLE TO SAVE WILL BE USED FOR VERY CHALLENGING POSTPRODUCTION.

Thanks a lot for your contribution. We hope you will like the treats, please like our Facebook profile and get excited for the movie (as much as we are:))

* postage is not a part of the reward, thanks for understanding :)