There are only 6 hours remaining before the end of the crowdfunding campaign. Thank you all for your support. We've never expected to receive this much support for the project. It fills our hearts with joy.

We would also like to remind you one last time. If you've pledged for physical rewards and you want to receive it by post, because you can't receive the reward in person in Prague, you should pledge for shipping reward in the list of rewards, which is appropriate to your region. If someone forgot to do so. There are only a few hours left to do it. Thank you

Closer look at our rewards 2 - Flipbook

Thanks again for your support and trust.

This update will introduce our Flipbook reward in more detail. Firstly, I want to remind you this video of the flipbook. I think it’s the best introduction to it. If you like it in the video, it is even better in person.

You can see the story of the animation in the video. It tells the story of Princess Luna's grief over the MelodicPony's passing. In memory of the joy, beauty and thoughts the tones of his music bring to the lives of others, she made his legacy shine eternally on the night sky.

The book will have 200 pages, with size of 10,5 x 14,8 cm (4,1 x 5,8 inches). But moving on from these technical informations. I would like to tell you about more behind the scene informations regarding the flipbook and the animation itself.

Book that was shown in the video is a few year-old test print, which went through rough handling over the years as is well visible on the cover. The final version will have laminated cover, which means that it will be a lot more difficult to damage your book via regular usage, so this shouldn’t happen to your flipbooks.

Another thing I want to mention is the colors. In the final print, the colors will be looking better with bigger contrast. Here you can see a comparison of how the picture looks in the printed book and compare it with original digital image. The result will be closer to the digital image on the right, though still not exactly the same. This is due to the test print not having properly prepared colors for the printer, which was fixed.

One last thing I would like to show you is shading. Here you can see the original image without shading and compare it with the shaded image. This shading was a bit inspired by the style used in DuoCartoonist animation Children of the night.

I hope this gives you a bit behind the scene look of how the flipbook was made. I hope that you will enjoy the finished books in your hands.

Thanks for your support.

Big thanks for making the recording happen

We can't believe this but with your amazing support we have reached our target amount. Thank you – it means the world to us! With this amount of money we can create a professional recording of Princess Twilight Orchestral Suite and play the song at some concerts of the orchestra. We will start even more in depth work on organizing the recording sessions soon.

This doesn't mean it's over though. If you or any of your friends will be able to help us and donate, it will still help the project. More funds mean more ways to achieve even better recording: renting a nicer studio, higher quality post production…

Also, the target amount does not actually cover everything. It is enough for the recording itself, but not other expenses like taxes and shipping costs. We've set this goal to have a bigger chance of getting to the target amount, willing to spend the rest of the money from our pockets. Nevertheless, our number one priority for this project is still the best possible recording. We would prefer spending your extra contributions on increasing the quality and covering the costs of the campaign ourselves.

Once again, many thanks to our amazing community! We never expected you’d help us collect the money to honor MelodicPony this quickly.

You are really awesome. Thanks again for your support, it means the world to us. With all your pledges, we are currently at 69% of our goal. We especially want to thank the person who sent 1 400 euro on christmas. We have no words to describe how shocked we were upon seeing the pledge. Thank you so much. It means a lot for the project. If you would like to contact us, we can surely find something special to give you in return for the generous donation.

But let’s get to the main topic of the update. In this one and the next update we would like to present to you our two rewards in bigger details.

Let’s start with the CD.

The CD will contain 11 tracks. Here you can take a closer look at them in this tracklist. You will know what the first 7 tracks are, but there are also 4 never released bonus tracks. 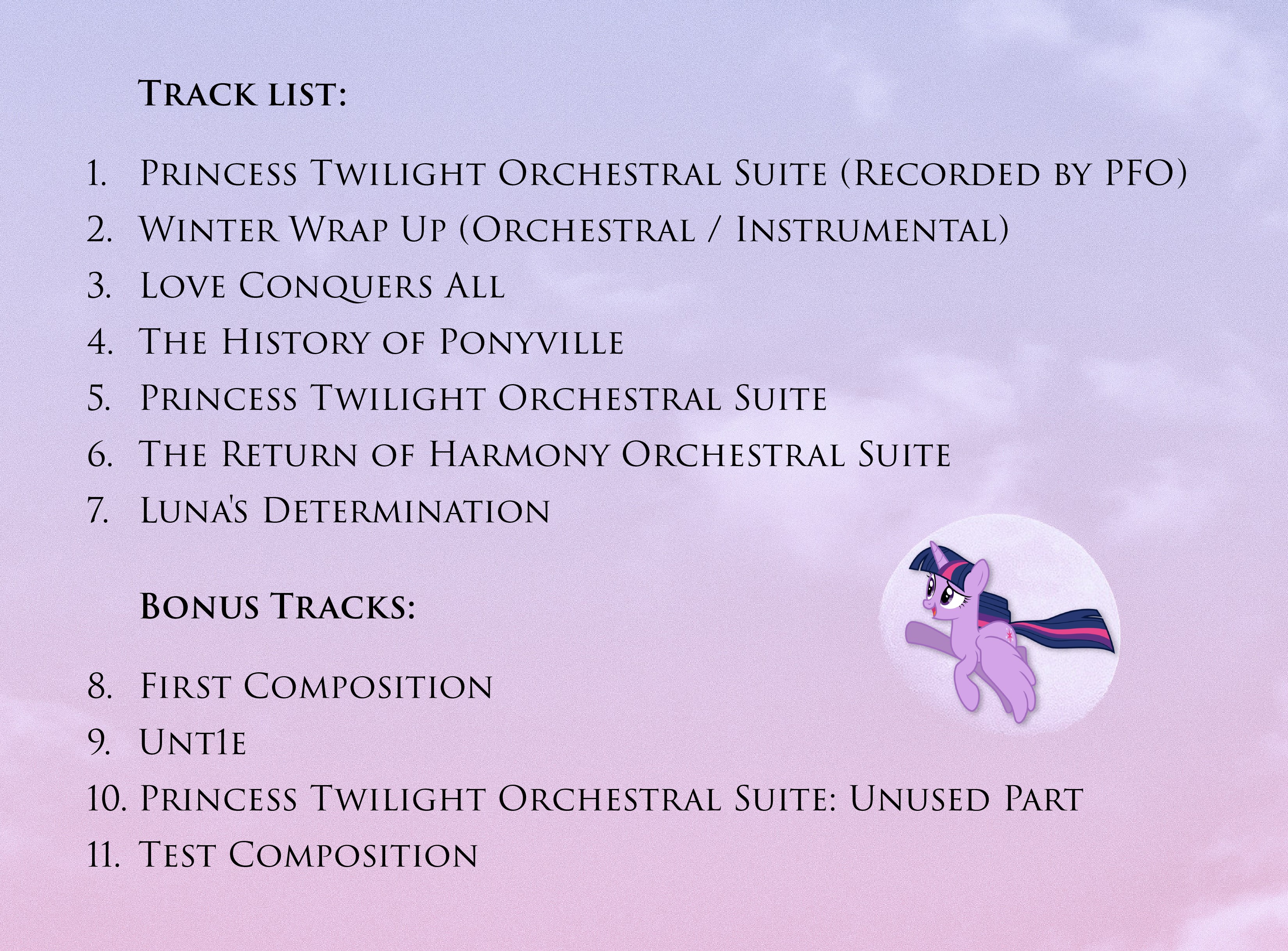 These bonus tracks were given to us from MelodicPony’s family. Martin (MelodicPony) hasn't really described his files, so we don’t know much about these tracks, but we will try to write down everything we know.

First track we want to mention is Test Composition. This track is something we expect he made as practice, because the last part of this piece of music was an exact copy of a track from Lord of the Rings in Ableton Live, the software he used to make his compositions.

As a small Christmas present and to thank you for your support, here you can listen to this bonus track. We’ve just decided to cut out the last part in which he remade the Lord of the Rings soundtrack from this release.

Second track was by the date of creation his first music we’ve found. It was created in May 2012, a couple months before his first pony track. It's a simpler composition than his later music, but it still has the charm we all know and love in his music.

Third track was made in February 2013, around the same time as Princess Twilight Orchestral Suite. We don’t know if they have any connections to each other, but they might. For me personally, it’s my favorite out of these bonus tracks with its nice prominent piano line.

Last track is part of the Princess Twilight Orchestral suite, which ended up on a cutting floor. It's a one-minute-long melody, which is interesting to hear as an alternate version of the song that was never used. It’s hard to tell at what time it would have started in the track, that’s why it will be only published separate from the suite, but the ending continues into a very recognizable melody from the final track.

That’s all that we have for the update. If you have any questions towards us. You can always ask here on Hithit or in our Facebook group.

We are happy people will finally have a chance to listen to these songs. And we would like to thank Martin's family once again for giving us access to the unreleased music.

Wish you a happy rest of the holidays.

Information regarding shipping of physical rewards

Thank you for your support and trust. We’ve tremendously happy that we’ve reached 20% of the target amount in the first 3 days. The beginning looks promising, for which we can thank our supporters. You guys are amazing! We still have a long way to go till the finish line. Though we believe we will get there and manage to accomplish something unique in the community.

I would also like to explain our system of paying for shipping of the physical rewards.

This was done so that the shipping expenses to outside of Europe don’t affect the price of items for people who live in places with a much cheaper shipping cost when sending from Czech Republic. We are sorry that it wasn’t mentioned clearly enough in the description of the rewards, but sadly we can’t change the text after we’ve published the campaign.

If you have any questions, feel free to contact us through the Question & Answers form here on Hithit or in our project Facebook group to which you can find a link at the bottom of the campaign page.

Thanks again. Seeing your support and sharing of the project is making our days.