AF APP - an app focused on the American football

American football is a sport played by two teams of 11 players on each side. Football is played with a ball with pointed ends. Points are scored in many ways, usually by one team getting the ball into the end zone of the other team. American football has been in the Czech Republic for over 20 years.

Vision of the app

Our main goal is to attract new players, using a quiz to explain the rules to fans, entertain current players and make the job easier for coaches and referees.

With the help of this app we can connect fans with the sport base of this sport. Through this app the players and coaches can connect with their fans and play multiplayer. Players on the other hand can challenge their rival player or the referee. The app also creates a leader board where the fans can compare themselves with the players.

It's important for us that the users have an actual overview of the Czech teams. That's why we would like to use logos and names of all the teams in Czech Republic. This way we would promote the teams and make them known worldwide.

That's not all! We will add football arcade games in time to the app. All the extra funds we will get will go to this upgrade.

Thanks to the easy controls the app can be used by all users of any age.

"We keep American football at heart. It changed our lives. We wondered how we could give back to the football and increase its popularity. Eventually we thought of creating this mobile app."

The shown picture presets the vision of the home page which can be seen after log in when choosing Player. If the users register as a coach, referee or a fan the home page will look differently.

In the case of registering as a player you will pick your position, jersey number and a team. All these choices will be shown on the character on the Home page (you can adjust everything in the settings). 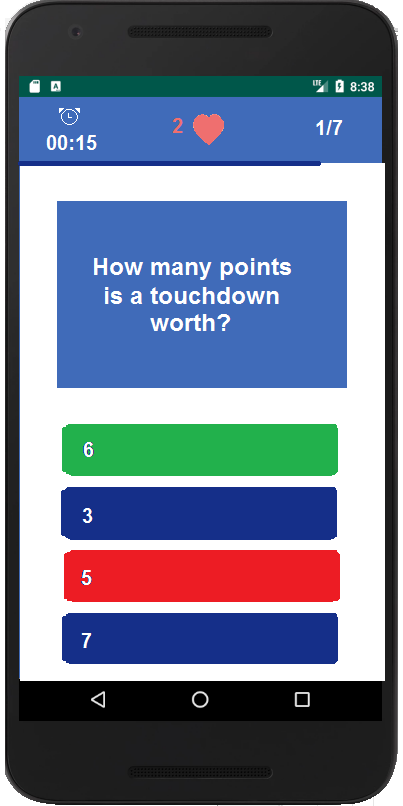 If the users click on the Play button they can choose from the question sets or the multiplayer.

In the case of picking the option Question sets, the sets of rules will be shown (fauls, basic rules of tackle football,...) after picking any option you will see 7 randomly generated questions.

If the answers are incorrect or the time runs up three times, the quiz will end and you will receive experience only. If you are successful you'll be rewarded with points and experience.

For example you can adjust the looks of your character for the points. 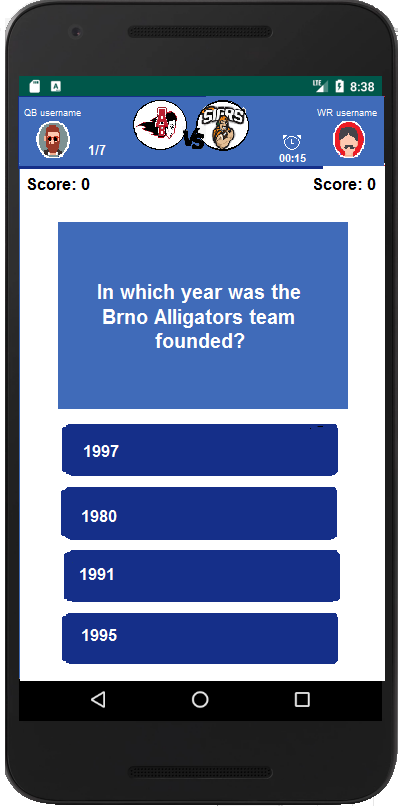 By clicking the multiplayer button the player will connect to a random opponent.

If the players want to compete against certain opponents they can challenge them in the app.

The rules are the same for the multiplayer as for the quiz from the unlocked question Sets.

The multiplayer question sets are mainly focused on football's interesting things and on the rules that don't fit into other sets of questions.

Approximate time of development and price

We talked with different IT companies that program mobile applications in different ways (native and hybrid). Because the hybrid development is half the price and only use one source code for both Android and iOS we decided to go this way.

The company we picked has worked on several apps and they offered us the lowest price.

We tried to minimize the cost, but we got to this price anyway. For this money, we will be able to create the application in the quality we think it deserves.

Graphic was done by us, without professional help, so the final product will look different and better.

With the difficulty of the app, we estimate the time of the creation to be 3 months.

We are two people who have the courage to follow their dreams and visions. We have been playing football for several years and we are sure that this exceptional sport deserves more attention in the Czech Republic. We believe this app has the potential to help a lot of people.

There are also many friends and teammates behind the project, without whom we would not have been able to create this project.