Barbora Baronova and Dita Pepe's forthcoming book on Australian women is part of a free-form literary and photographic series, Voices of Women, in which the authors explore the lives of contemporary women from diverse parts of the world.

3 days until the end

The publication Voices of Women: Australia is based on documentary material recorded during research stay of Barbora Baronová, a literary documentarian, at the University of New South Wales in Sydney, Australia. During her five months there, she conducted over twenty documentary interviews with prominent local artists, writers, filmmakers, activists, photographers, scientists, and journalists, exploring themes inherent in women regardless of their different cultures – asking about their positions in society, the expectations placed on them, and their career options. The interviews cover various aspects of the documentary profession, but also more general social issues – for example, the position of women in the contemporary Western world, influenced by the second wave of feminism in the 1970s.

Read excerpts of the stories from Voices of Women: Australia HERE. 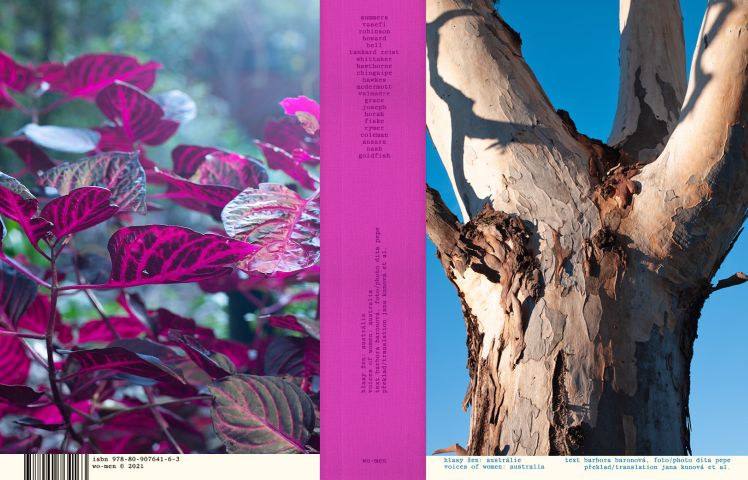 Among the people telling their stories is prominent feminist Anne Summers, who describes her own abortion as one of the moments that initiated her activism. Anthropology professor Diane Bell tells the story of a struggle for respect for women in science. Alison Whittaker's story is the tale of a young Australian lesbian poet's journey from rural communities to Harvard Law. Publisher Susan Hawthorne thematises her transition from an employee at the global publishing house Penguin to a publisher of non-mainstream titles. The story of Olga Horak and Halina Robinson reflects the topic of the Holocaust – while Olga survived five concentration camps, Halina was thrown over the wall of the Warsaw Ghetto and was on the run from the Nazis for eighteen months. All of the women had their portraits taken by Dita Pepe.

Those who draw inspiration from the stories of different generations. Those interested in gender issues or documentary work. Those who have been moved by the stories or interviews in the books Misses, Women on Women, Women 60+, Milk and Honey, and Girls of the First Republic. Those who enjoy photography books. Those who are creating a sustainable and artistically valuable library at home.Those who enjoy flipping through aesthetic books crafted with an emphasis on quality and the sensory materials of pages, book covers, bindings, edges, and embossing.

Contributors to the book

Barbora Baronová (*1980) - literary documentarian, publisher and musician. Holder of several awards for the book Slečny (Misses), Měj ráda sama sebe (Love yourself) and Intimita (Intimacy). Set up the publishing house wo-men oriented toward (not only) gender-focused art books in 2012.

Dita Pepe (*1973) - photographer and teacher. Teaches at the Institute of Creative Photography in Opava. Holder of several Czech and international awards, including Personality of Czech Photography 2012 for the book Autoportréty (Self-portraits).

The project was developed during a research stay at the University of New South Wales in Sydney during Barbora Baronová's PhD studies at Tomas Bata University in Zlín in 2017.

wo-men publishing is a small independent publisher founded by literary documentarian Barbora Baronová focused on artistic literary and photographic documentary books. The topics the publishing house covers are minority, taboo, non-mainstream. They give a voice to people on the edge of society. For their work, they have received several awards at home and abroad, including Magnesia Litera and the Most Beautiful Czech Books of the Year.