What? LOCATIONS and PLOTS!

22 days! That is the time that remains in our campaign, and we only need 40% more to meet our goals! Thank you all for your support.

In the meantime, we have presented quite a lot of things already: details on the game in the Dohráno podcast, the campaign plan, the rules, and we also launched the signup for online playthroughs, as well as a Discord server a and presented character cards.

Today we’ll look at our Plot and Location cards. Before we do that, though, we just want to answer some FAQs. First off: the game is still being developed and the point of the crowdfunding is to allows us to finish it. That means finalize the graphic art, make all the cards, print the components. All these things cost some money: we cannot make the graphic art for 300 cards through volunteer work. That’s why we are using HitHit, so that we can get the game done.

Secondly: The game is not our full-time job and never will be. All of the team members have their day jobs or study full-time and we work on the game in our free time. We’re not trying to get rich with the game. We’re making Legion because it makes us happy and because we love games and the history of the Legions. The budget also reflects that: half of all out profits (whatever is left after we cover the costs) will go to the Czechoslovak Legionnaire Association and the Rolling Association.

Now, to the cards. Let’s start with the LOCATIONS! 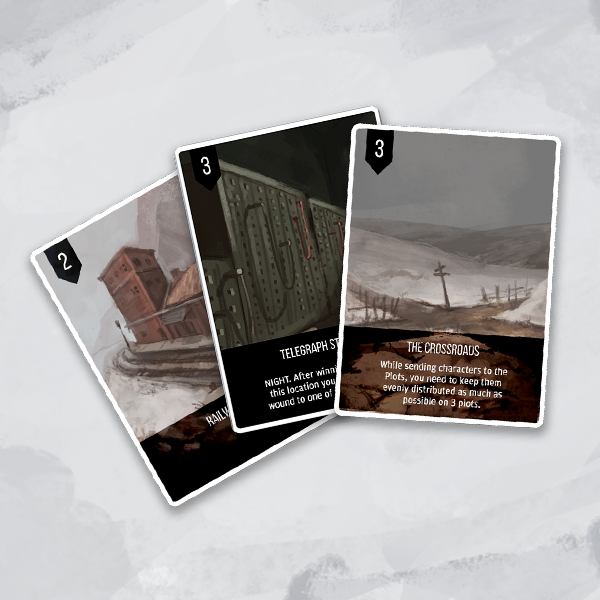 Locations can have three difficulty levels: first, second, and a special final location, the Destination.

Every round takes place at a new Location. The last Location must be drawn from the Destination pack. The player who ends up with the lowest number of points at the end of the third day (round) picks this last location from the pack.

The first two rounds are at first level Locations, the third and fourth and second level Locations. The fifth round takes place at the final Destination.

What do the Locations look like and what makes them special?

Every location sets up the atmosphere for the upcoming round. It contains a difficulty rating and some victory points, as well as special effect that’s described on the card. Some Locations take place at night, which means you deploy characters to squad in secret, with your cards covered. Other Locations wound your characters with a cruel blizzard or let them rest in the peace of a monastery rather than hurry after Plots. You can find yourselves at a marketplace, in the middle of the woods, by a mass grave, in a storm, or at a railway station. Every day brings a new challenge!

Then we have the PLOT cards! 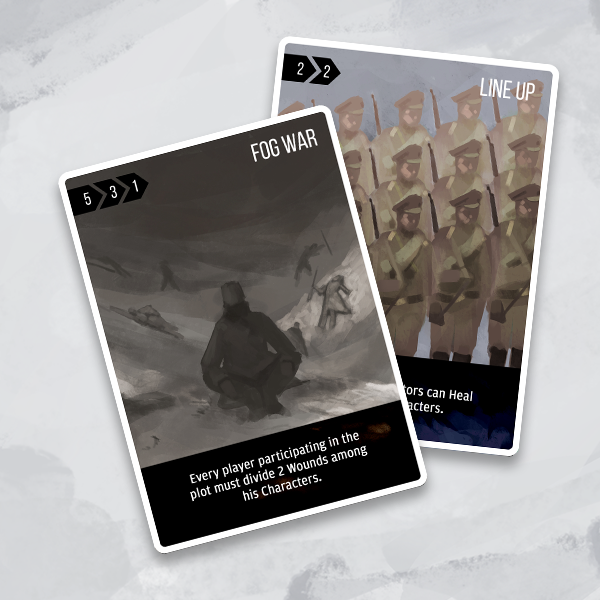 The plots let you fight with sword or pistol, make speeches at funerals, reveal secret dispatches, or get involved in the opium trade. When resolving a Plot, you need to think tactically, find allies in other fractions or bribe other players. Plots let you win victory points.

They can be competitive or cooperative.

In a competitive plot, players battle against one another, trying to get the strongest squad at the plot.

There are over 50 Plots in the game. Your players sometimes need combat skills to take part in a plot, at other times thay may use their charm or cunning.

The reward for resolving Plots is victory points. Many Plots also contain special effects: Some wound your characters, while others give you a tactical advantage.

Whoever wins the most plots in a round controls the Location and its victory points.