Guitar and geometry? Shapes make music too. At GuitarAct.com

A multi-genre guitar course for a wide range of guitarists, using innovative methods of teaching guitar. Well-known musician Mike Bugala wants to present unique ways how to learn to play guitar more efficient. You can support his "one-man project" here.

You feel like you're a good guitarist, but you're losing confidence on stage?

You've been playing the guitar for a long time, but feel like you're stuck?

Do you need a system? Are you just waiting for the right impulse?

Whether you are an intermediate guitarist and want to go deep in music or you are a beginner looking for a system to get to it as quickly as possible, GuitarAct.com is just for you. Everyone will find the answers to his questions.

I have been teaching guitar since my high school time and after more than a hundred students who "passed through my hands", I decided to offer a comprehensive summary of my knowledge from teaching music and personal experiences from gigging or recording, to the widest possible audience of guitarists, who want to step into the next level of their playing.

These days I am already intensively preparing this project. I am creating complete audiovisual and textual content for a guitar course in the form of a "membership website" for beginners and intermediates.

The year 2020 was full of questions for us, as artists, and I want to answer one of them by creating an innovative guitar course. And so, despite countless hours of work on the project, I feel that I combine business with pleasure and, as a father of two little kids, that I will find one of the new ways of full-time work, as live concerts are still in sight.

What is GuitarAct.com and what makes it different?

The course will consist of 2 Levels, each will have 5 Stages. Each Stage contains 5-6 thematically and chronologically arranged lessons. The lessons will be grouped under 3 selected areas: Lines (melodic exercises and examples), Chords (harmonic part, voicings) and Act (practical part - interpretation). In total, there will be about 60 video lessons and more than 10 hours of video and audio material. The course will also include a detailed Workbook with music and visual attachments, as well as musical materials for the exercises.

A characteristic feature of the whole course is the emphasis on the visualization of each musical component that will be the subject of the lesson (e.g. intervals, scales, chords) using geometry. By determining a certain number of shapes (fingerings of intervals, scales, arpeggios) and their cyclic repetition, a unique way of simple memorization and systematization of a seemingly incomprehensible amount of study material is created. Instead of the usual representation of a guitar fingerboard (6 strings), the shapes are anchored in universal space, on strings in tuning by fourths.​ It means:

Applying one system to almost everything related to guitar improvisation and interpretation. 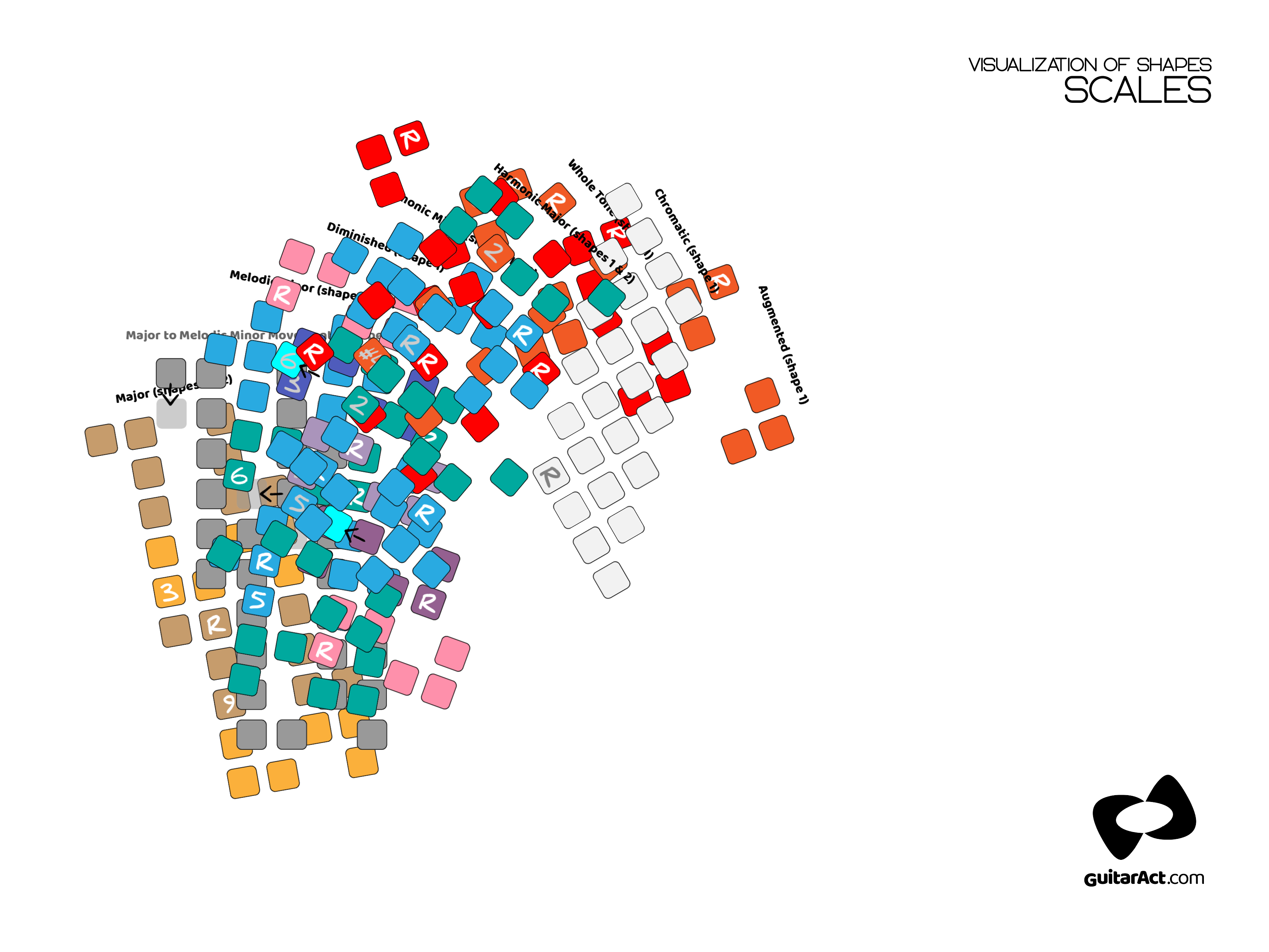 Creativity, musical invention, prompt interaction, the ability to improvise are the benefits that every student receives with Guitaract.com.

There will also be the option of a private online lesson that will meet all technical requirements for the quality of video and audio streaming. In case of interest (if circumstances allow), we can meet in person after the agreement.

The entire content of the GuitarAct.com course will be in the English language.

Thank you for your support

Dear contributors, nowadays it is extremely complicated to carry out artistic and educational projects. But the idea of the project is alive, the creative process is high, and I firmly believe that thanks to websites like Hithit.com, there will be people who will be able to turn this idea into reality. By supporting this course, you have a unique opportunity to become part of a project that will help many young musicians and especially guitarists to develop their talent, step by step to improve their skills and knowledge.

Anyone who has worked on a long-term project just by himself knows how much time the whole setup and realization will take. However, the obtained funds will be used exclusively to reimburse the purchased technical equipment - lighting, sound, cameras, converters, stands, cables ...

... and one cheap lunch menu a day so I don't die of hunger by working hard to get the best results.

Who is Mike Bugala?

He studied guitar at the Jazz Institute Universität fur Musik und darstellende Kunst in Graz, and in addition to jazz, he feels right at home in pop music, hip-hop, rock music, etc.

During the last 20 years of his professional career, he participated in more than 40 CDs and DVDs with various artists of jazz and popular music, and also recorded music in several Slovak films. He has performed extensively at international festivals (Ottawa Jazz Festival, Jazz Festival Turcoing, Warsaw Jazz Festival, etc.) and prestigious world stages such as Carnegie Hall in New York, Musikverein in Vienna, Prague's Rudolfinum, Konzerthuas in Berlin and prestigious New York and European music clubs.

He is the founder and leader of the Michal Bugala Group and the Michal Bugala New Trio, he has released two solo albums: 1st Touch, which he recorded in New York with world-class musicians such as Kendrick Scott, Danny Grissett, Seamus Blake and the 2012 Esprit Award-winning album Y for Best Jazz Album.

He currently formed together with David Hodek and Richard Csino a new multi-genre project called TripleJump, reflecting a unique view of 21st-century work and concentrating on the fusion of several musical genres.

In the field of pop and R'nB music, he has collaborated with solo singers such as Marián Čekovský, AnitaSoul, Richard Muller, Janko Lehotský (Modus 2002), David Koller, NYC Unit, Kim Davis, Vivian Sessoms, Nicol McCloud, Rick Bailey (Delegation) and Ali. Caldwell, a finalist on the American singing show The Voice. He is the leader of the rock band ShotUp, which he founded with singer Juraj Zaujec and a member of the accompanying group of the Fragile Queen project, as well as a guest member of the Opoštáris Band, the court group Rytmusa and other hip-hop performers. As a guitarist he regularly performs in several TV shows (Legends of Pop, The Voice, Superstar…)

Michal Bugala has also been engaged in pedagogical activities for a long time. He is the head of the jazz department at HUAJA in Banská Štiavnica and regularly lectures at the Bratislava Summer Jazz Workshop. He is also setting up his own online guitar school, GuitarAct.com.

He is also active as an organizer of events, in 2016 he founded the Winter JazzFest Trnava festival and for several years he was a co-organizer of the international festival Trnavsky Jazzyk Festival.

If you find the idea of this project interesting, you are a guitar player and you would appreciate something similar, or you are the parent of a talented young guitarist and you want professional and original guidance for him, I will be grateful for your support and I believe you will enjoy the results of this project.