MelodicPony was a very talented composer of orchestral music, author of many songs inspired by the series “My Little Pony: Friendship is Magic”. He spent hundreds of hours composing the music, which brought him popularity across the global fan community. He left us forever in 2014, at the age of only 26, and his death affected everyone: both those who knew him personally and those who knew him through the awesome music he created.

We decided to honor his memory with something he joked about during his lifetime and what would make him really happy: to have his song recorded by a live orchestra.

The main goal of this campaign is to record the song “Princess Twilight Orchestral Suite” with a live orchestra. We want to record only one of the songs from the mentioned author, because the cost of recording all of them would be too expensive at this point. The recording should take place during the spring of 2022.

But recording a song is not the only goal. We also want to give people the opportunity to listen to MelodicPony's music live. The orchestra has agreed to play the same song at two of its concerts in Prague. We don't know the exact dates thanks to the current pandemic situation, but the moment we will agree upon the exact date with the orchestra, we will inform you.

We are aware that not everyone will have the opportunity to participate in person, so we are also planning a live broadcast of the concert on the YouTube: this way, everyone interested will be able to share the premiere of the live performance of his music. The concert will also be recorded and then published.

If you want to listen to MelodicPony's music or just remind yourself the known melody, we recommend a song whose live orchestra recording is the subject of this campaign: "Princess Twilight Orchestral Suite".

Why we need your support?

We want to make the recording in the best quality, which is not a cheap thing for this kind of songs. The orchestra will have 45 members plus a conductor, who devote their time and effort to recording and rehearsing. In addition, it is necessary to organize a choir, rent a recording studio with equipment and a sound engineer who will make sure that the whole performance sounds great. Finally, the song needs to be processed in post-production to create the best possible mix. Altogether, the costs rise up approximately to €4,000.

We know that it is a lot of money, but something unique will be created that will stay with us forever. And all the rewards for your support will be unique as well! We will either ship them to you, or there will be option to pick them up in Prague. 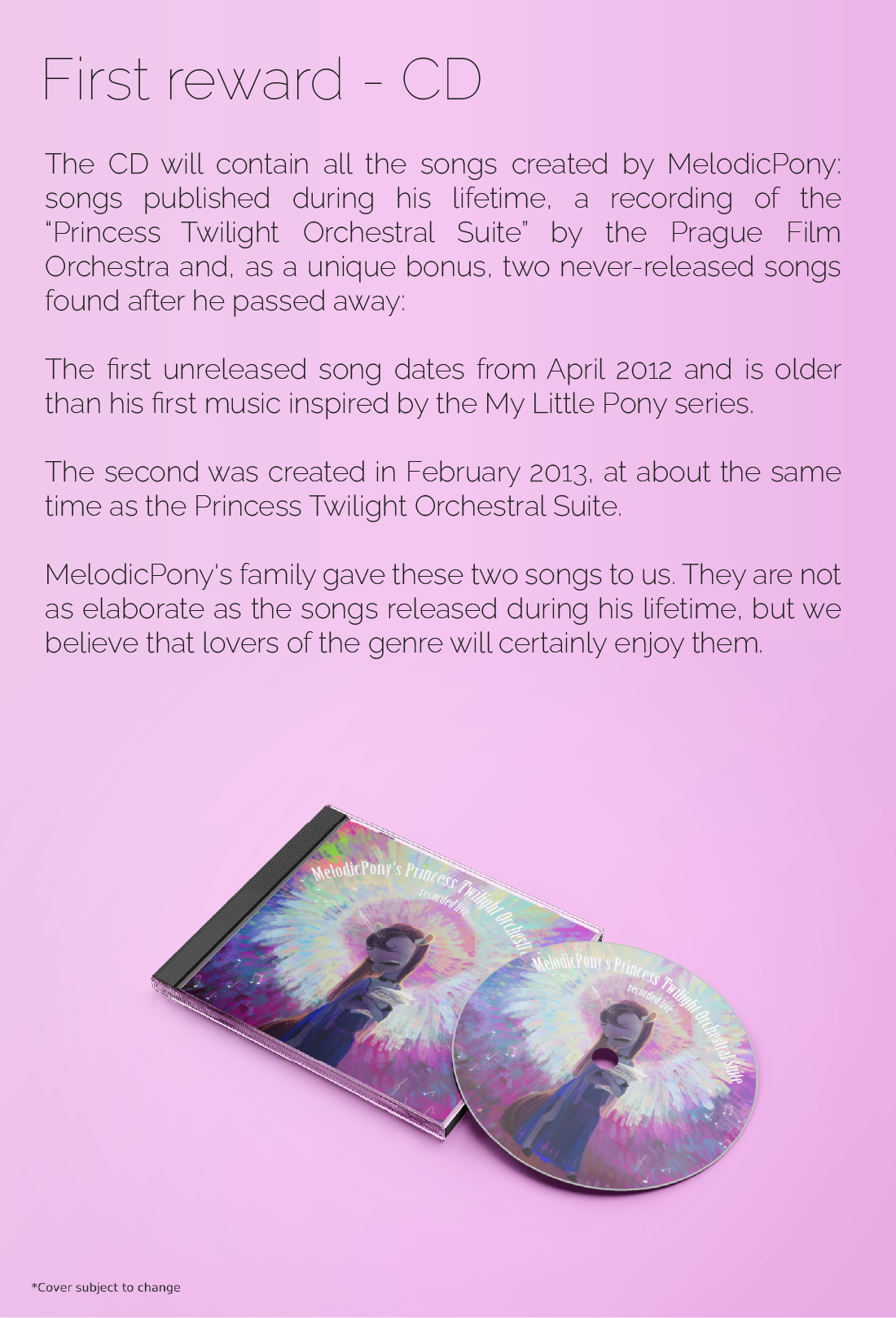 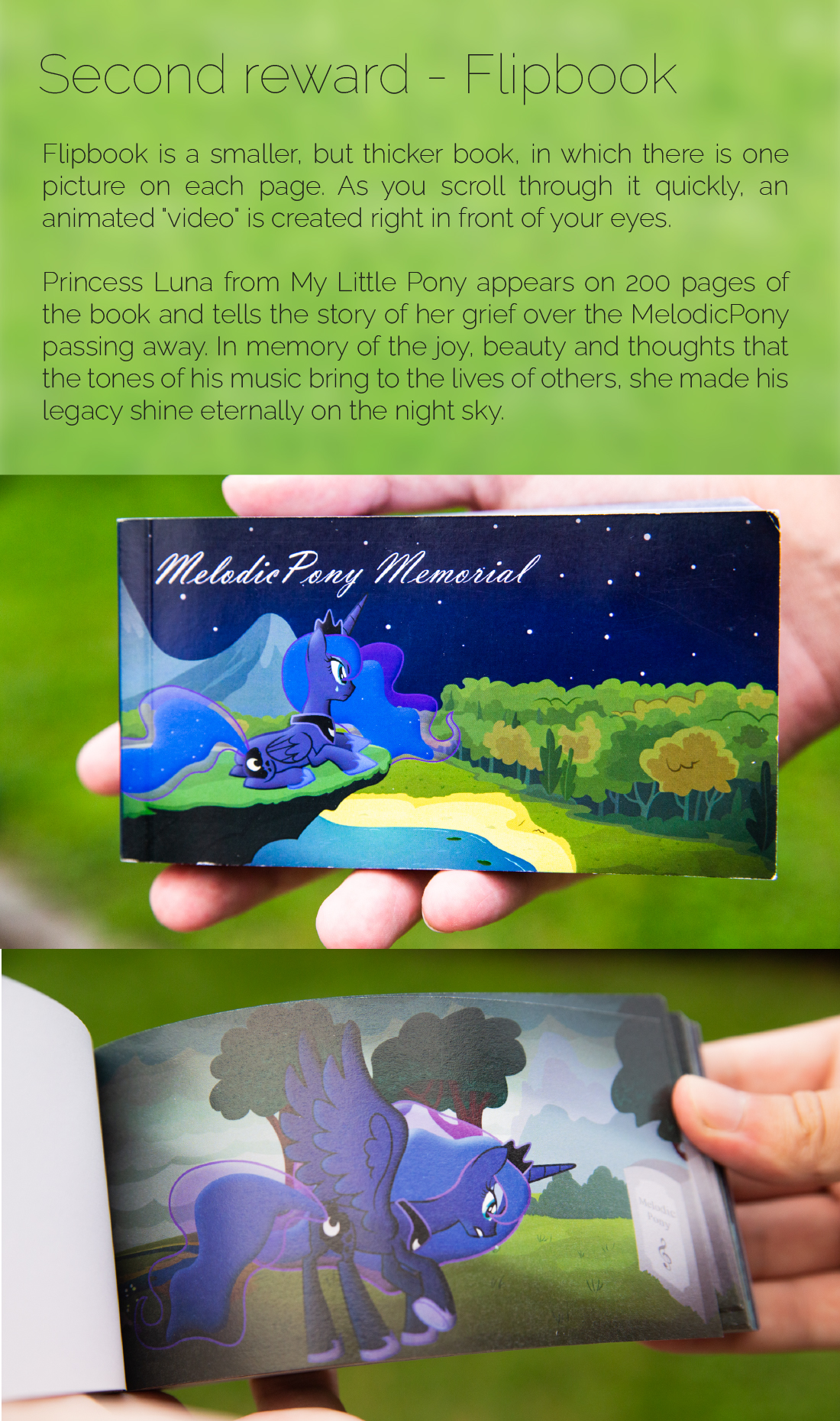 Who will record the song?

We have agreed on the recording itself with the Prague Film Orchestra, which specializes in film music and performs both in the Czech Republic and Slovakia. They support the whole idea, for which they deserve our big thanks! Like us, they are looking forward that – with your generous support – together we create a unique piece of music art that everyone will enjoy to listening to!

And because the music is more than thousands of words, here you can listen to the Prague Film Orchestra live performance of The Imperial March - one of the most famous songs from the Star Wars saga:

We are a group of fans of the series “My Little Pony: Friendship is Magic” (so called “bronies”) and the music of MelodicPony, inspired by this series. We like his music a lot, he was our favorite musician in the brony community. When we learned that he had left us forever, it seemed very right to us that we create something special to commemorate both him and his work. And so this project was created. We had no idea how complicated it will be and how much time all the work would it take.

Bori, Aelipse and Kelly are those who are mainly involved in the whole project. We faced many difficulties during the project organization: the transcription of the music composition was already done, but it took many years to find an orchestra that would be willing to participate in such a small project with us. Finally, more than a year ago at a concert of the Prague Film Orchestra, Bori asked the orchestra manager if they might be interested in getting involved in the project. And so after a long time, the project came to life again.

Kelly and Aelipse still help and provide valuable advice, but they don't have as much free time anymore, so the biggest part of the project now rests on Bori's shoulders. With experience from the past, we believe that now we will bring this project to a final success!

If the project is a success, we will honor the talent that inspired many community musicians in the best way: his music will be immortalized by a live orchestra and played for everyone to enjoy at live concerts: for bronies, for people outside the fan community alike, and especially for his family. We invite them to the concerts to hear what MelodicPony has created and to see how many other people his music still appeals to.

Thank you for supporting us and sharing this project! It means the world to all of us!

Jan 24, 2022 Last 6 hours remaining of the campaign + reminder to pledge for shipping of physical rewards

There are only 6 hours remaining before the end of the crowdfunding campaign. Thank you all for your support. We've never expected to receive this much support for the project. It fills our hearts with joy. We would also like to remind you one last time. If you've pledged for physical rewards and…

Thanks again for your support and trust. This update will introduce our Flipbook reward in more detail. Firstly, I want to remind you this video of the flipbook. I think it’s the best introduction to it. If you like it in the video, it is even better in person. You can see the story of the…